Note: despite having WiFi built-in, the DR590W-2CH is not cloud-capable. This means that with the DR590W-2CH, you can check the camera’s live view, easily adjust settings and transfer videos to your phone with the BlackVue app, however, you cannot access your camera Over-the-Cloud like you can do with the BlackVue DR650S, DR750S-1CH or DR750S-2CH.

Our favorite things about the DR590W-2CH

The DR590W-2CH is an excellent choice for those who would like the higher 1080p video resolution (as compared to the DR430 and 470’s 720p camera resolution), but who also may not necessarily need all the additional bells and whistles of some of the more advanced BlackVue cameras such as the Cloud-Capable DR750S-2CH. However, like the DR750S-2CH, the DR590W-2CH front camera does benefit from using Sony’s newest STARVIS™ imaging sensor, for superior video quality during the day and even at night when lesser dashcams may suffer.

BlackVue’s new DR590W is almost identical to the also-just-released DR590W-1CH, except for the addition of a separate rear camera on the DR590W-2CH that is designed to mount in the rear windshield to record what is going on behind your car. With simple plug-and-play operation, you can be safely recording both in front of and behind your car in a matter of minutes!

Included in the Box 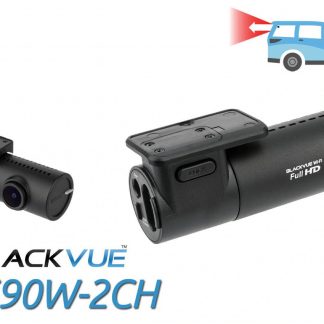