2 in stock (can be backordered)

Note: despite having WiFi built-in for a direct-WiFi connection to your smartphone, the DR590W-2CH-IR is not cloud-capable. However, this does mean that with the DR590W-2CH-IR’s direct WiFi capability, you can connect directly with your smartphone to the camera, to check the camera’s live view, easily adjust settings and transfer videos to your phone with the BlackVue app. However, you cannot access your camera Over-the-Cloud like you can do with the BlackVue DR650S-2CH-IR, DR750S-1CH or DR750S-2CH.

The new DR590W-2CH-IR’s infrared interior camera provides clarity even in complete darkness. The infrared camera secures the interior, driver, and passengers of your vehicle. The inconspicuous infrared LEDs automatically activate based on the ambient light inside your vehicle. The camera’s spectacular clarity even in pitch black lighting conditions offers excellent peace of mind to taxi and rideshare/TNC drivers.

Utilizing the BlackVue App or Viewer, you can further customize the way the DR590W-2CH-IR operates; including 180° Image Rotation to accommodate your setup: if the image comes out upside down, just activate this feature and it will fix the image orientation. In addition to this, you can also control the LED settings, giving you complete stealth while in Parking Mode.

Our favorite things about the DR590W-2CH-IR

The DR590W-2CH-IR is an excellent choice for those who would like the higher 1080p video resolution (as compared to the DR430 and 470’s 720p camera resolution), but who also may not necessarily need all the additional bells and whistles of some of the more advanced BlackVue cameras such as the Cloud-Capable DR750S-2CH. However, like the DR750S-2CH, the DR590W-2CH-IR front camera does benefit from using Sony’s newest STARVIS™ imaging sensor, for superior video quality during the day and even at night when lesser dashcams may suffer.

BlackVue’s new DR590W-2CH-IR is almost identical to the also-just-released DR590W-1CH, except for the addition of a separate second camera on the DR590W-2CH-IR that is designed to mount in the front (or rear) windshield to record what is going on inside your car. With simple plug-and-play operation, you can be safely recording both in front of and inside your car in a matter of minutes!

Included in the Box 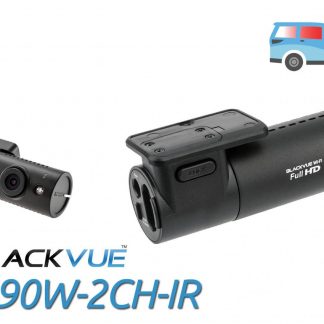