The DR750S-1CH is a single-lens (one channel) dashcam system that records in 1080p resolution. As the successor to the DR650S Series, BlackVue DR750S Series sets a new standard for connected dashcams. Not only does the DR750S-1CH offer a direct WiFi connection and BlackVue Over-the-Cloud capability, but it also brings you image quality and performance rarely seen in a dashcam.

Our favorite new features of the DR750S-1CH

Upgrade to a Sony STARVIS™ sensor with Full HD 1080p at up to 60FPS (frames per second). STARVIS imaging sensors are the new benchmark in mobile video clarity, especially under low light conditions. The extra clarity provided by the STARVIS sensors ensures that your dashcam will capture critical details whether you are driving your vehicle, or letting the DR750S-1CH monitor your vehicle while it is parked.

The advantage of 60FPS video capture is that your video will be silky smooth and packed with twice as much information when compared to a 30FPS system. The DR750S-1CH forward-facing camera has a new “Sport Mode” where the framerate is set to 60 frames per second, keeping all details sharp even in moments of fast action. With 60fps, motion blur is significantly reduced, compared to 30fps. That means your BlackVue can better capture important details of an event, such as those critical license plate numbers.

Of course, the higher the framerate and image quality settings are, the bigger the file size will be. So as a heads up, this means there may be an increase in the time necessary to transfer video files over Wi-Fi. With that being said, remote Live View using BlackVue Over-the-Cloud is not affected by the image quality and framerate settings.

By default, the DR750S-1CH records audio from inside the vehicle, but audio recording can be disabled permanently in the BlackVue settings, or temporarily by swiping your finger on the left side of the front camera. The power cord connection on the DR750S-1CH is compatible with previous generation DR650S and DR650GW dashcams; making the upgrade to a 750S even easier. However, the front windshield mount of the 750S is not compatible with the 650S, so the mount will need to be replaced if you’re upgrading from a 550 or 650GW/S.

BlackVue Over the Cloud

With the free Over-the-Cloud service, check on your car from anywhere, anytime. Have an internet connection (built-in or via mobile WiFi hotspot) in your vehicle? Perfect! You’re already set to utilize all of the features that come with a free BlackVue Over-the-Cloud account. 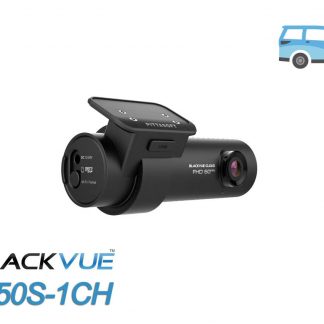