The USB-DVR is disguised as an ordinary flash drive. It functions not only as a DVR but a 4 GB flash drive as well. It has the capability of recording video at a resolution of 720*480 and still images at 5 mpx. Video can be recorded by using the motion detection feature or by recording continuously. A 4GB SD card is included and the DVR can support up to a 16GB microSD card (not included). Working time is approximately 45 minutes and charging time is approximately 4 hours. After recording, simply plug the device into any computer running Windows ME or newer or running Mac’s OS X. It loads just like a regular USB flash drive and allows you to easily access your videos and other files. 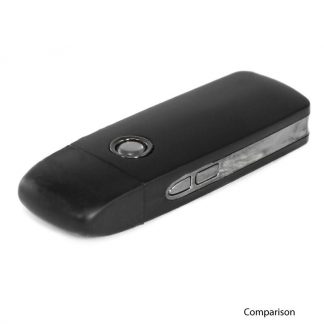